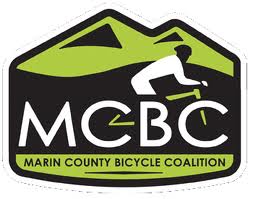 Hello everyone, this is Cella Wright posting about an interview we had with Tom Boss, the membership director of the Marin County Bike Coalition (MCBC) which has been doing many notable deeds since it was formed in 1998. Along with trying to disprove the misconception that many automobile-drivers have about bicyclists and teaching people about the goodness of the biking lifestyle (the positive mental, physical, and environmental effects), MCBC also improves Marin's roads and paths for both bicyclists and pedestrians.The benefits of biking have been proven: a Danish study by scientists Andersen, Schnohr, Schroll and Hein in 2000, proved that people who cycle regularly live longer and healthier lives than those who don't. Biking can be an incredibly invigorating workout (burns calories, builds muscular endurance, and is great aerobic exercise), or a way to simply transport yourself from point A to point B without inflicting environmental damage that would otherwise occur with a motorized vehicle. Additionally, biking is fiscally beneficial; "Studies have said that you can actually employ more people building bicycle and pedestrian projects than you can building freeway projects, and there's a bigger bang for your buck-," Tom says,"in Oregon a few years ago, they were trying to get more traffic across a river, and one option was to widen the bridge, which would have cost tens of millions of dollars, [but] they decided to take out one of the lanes and open it up to bicycles, and it turns out that since it is such a  bike friendly city, they were able to increase the traffic flow over that bridge for less than a million dollars by putting in a bike lane rather than expanding the bridge for another car lane." MCBC has made many great accomplishments in Marin: in May this year MCBC's Off-Road Trail Access and Education Program opened the new multi-use 680 trail that connects Loma Alta and Terra Linda-Sleepy Hollow Preserves, they have built the North-South Greenway (which includes the Alto Tunnel that connects Mill Valley and Corte Madera, the Lincoln Hill Pathway which connects Terra Linda and downtown San Rafael, and the Central Marin Ferry Connection Project that links the Larkspur ferry with towns and cities to the south), the East-West Greenway (which includes the Inkwells bridge that connects 8 miles of pathways), have educated people of all ages about the benefits of cycling, and have made roads all throughout Marin safe for both pedestrians and bicyclists.MCBC's primary goal is for 20 percent of all trips in Marin to be made by walking or biking by 2020. Tom says that the futures of both biking and MCBC are bright.

In order to learn more about Tom Boss & MCBC, please visit the MCBC Home Page. The interview with Tom Boss will be online in the near future.
Posted by Unknown at 10:49 PM No comments:

"We want those who come after us to inherit a world where the wild is still alive."


Hailey Jurgens here.
Posting about an interview I had with Noah Greenwald, the Endangered Species Director for the Center for Biological Diversity. The Center for Biological Diversity believes that every species has an intrinsic right to live. Their work focuses on protecting the lands, waters, and climate that species require to survive through a combination of science, law, and creative media. The Center is the nation’s leader in preserving endangered species, having secured Endangered Species Act protection for hundreds of species and hundreds of millions of acres of land and water.  Edward Humes, renowned author has said, " The modern American environmental movement has been reinvented by the center. " in his book Eco Barons.

Noah Greenwald directs the centers efforts to protect new species under the Endangered Species Act. He also works to educate the public on the importance of protecting biodiversity, and the multitude of threats facing North American Wildlife. He holds a bachelors in science ecology and a master's in forest ecology and conservation.I contacted Mr. Greenwald, believing that an interview with him would help to convey the imperative state of Earths biodiversity. In hopes that out of the number of people Earthscope Media reaches, at least some will be inspired to take action. Noah likewise believes we desperately need to grasp peoples attention, the loss of these species is irreversible and will impact everything around us.  The knowledge I've gained from Noah as well as the Centers website has greatly impacted me, and it needs to be shared. What took 4 billion years to create is disappearing far more quickly than most of us realize. Currently, species are going extinct at 1,000-10,000 times the natural rate. We are experiencing the worst series of species die-offs since the loss of the dinosaurs!

"Beyond its intrinsic value, biodiversity is necessary to human survival. Ecosystem diversity is crucial to ecosystem integrity, which in turn enables our life support, giving us a livable climate, breathable air, and drinkable water. Food-crop diversity and pollinating insects and bats allow agriculture to support our populations; when disease strikes a food crop, only diversity can save the system from collapse. Plant and animal diversity provide building blocks for medicine, both current and potential; almost half of the pharmaceuticals used in the United States today are manufactured using natural compounds, many of which cannot be synthesized. They also provide critical industrial products used to build our homes and businesses, from wood and rubber to the fuels that underpin our economies — even coal and oil are the products of ancient plant matter and preserved zooplankton remains.
Biodiversity plays a central mythic and symbolic role in our language, religion, literature, art, and music, making it a key component of human culture with benefits to society that have not been quantified but are clearly vast. From our earliest prehistory, people have never lived in a world with low biodiversity. We've always been dependent on a varied and rich natural environment for both our physical survival and our psychological and spiritual health. As extinctions multiply, and cannot be undone, we tread further and further into unexplored terrain — a journey from which there is no return."-excerpt from The Elements of Biodiversity

This is India Neville , an EarthScope Reporter and Intern with the Teen Environmental Media Program....

Last week we had the amazing opportunity of meeting Dune Lankard and hearing all about all the projects and organizations he’s involved in.  A native Athabaskan Eyak from the Copper River Delta on the Gulf of Alaska, fishing was always a huge part of his life. He would spend his summer months out with fishing with his family on Prince William Sound and Copper River Delta off of Alaska. “ I lived…out in the wild just chasing fish pretty much all my youth,” Dune recalled. “All of [my family] grew up living from the sea…I remember almost every meal we’d come in and we go ‘oh man we’re having seafood again?!’ ” It wasn’t until he tried a hamburger as a teenager that he realized just how lucky he was for having all that fresh, delicious fish.

Fishing and living off the sea was always a part of Dune’s childhood and it carried over into his job as a commercial fisherman. However on March 24, 1989 all that changed when hundreds of thousands of barrels of crude oil spilled into Prince William Sound. For Dune, the Exxon Valdez oil spill not only changed his life, but the entire community; his family and friends and the environment. So many had lived off the sea, which was now saturated with oil.  All of the creatures who found the ocean their home were affected and salmon fishing, that had been the livelihoods of numerous people, was brought to a halt.

That day of the oil spill Dune decided to become an activist and leader fighting for environmental rights and making sure that people’s voices are being heard. He focuses a lot on indigenous peoples rights and emphasized the fact of protecting native rights as well as the conservation of wildlife was key to success. He started many organizations that followed these guidelines including the Native Conservancy Land Trust. “We wanted to protect endangered peoples and culture not just endangered plants and animals like the rest of the conservation community,” he said.

Dune has had and still continues to have a lasting legacy and powerful voice in the activist movement.  He has founded numerous organizations and is on the board of many others.  He has won Supreme Court cases and is always fighting hard for what he believes in.

If you are interested in learning more about Dune be sure to visit http://www.redzone.org.

The Redzone network name was chosen shortly after the 1989 Exxon Valdez oil spill because local people wanted to highlight endangered wild red (sockeye) salmon, Indigenous people and sacred places in peril. Redzone is the virtual home to Chinook, Sockeye, Coho, Chum and Pink salmon that have been part of the Eyak people's way of life on the Copper River Delta and in eastern Prince William Sound for over 3,500 years, and counting. The still intact thriving ecosystem, with its wild salmon returning annually to spawn in their millions, is home to eagle, bear, beaver, wolves, moose and millions of migratory shorebirds and waterfowl.

Dune's Eyak name is Jamachakih, which means ‘the little bird that screams really loud and won’t shut up’ “. 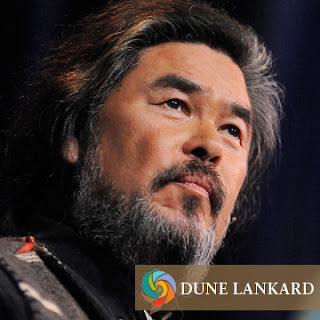 Soon we will have the interview with him posted as well.