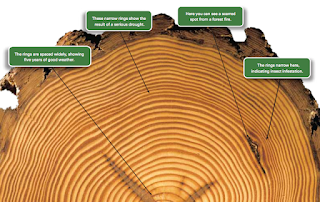 How can trees give us information about environmental history? We worked with dendrochronologist, Daniel Griffin about his research and findings among the subject.

Tree ring data can be used to determine many different key factors of climate change by counting the number of rings on a tree. Each year, trees add a new ring, meaning that each year can tell us something new. Here is Griffin to explain more...

“We can use tree rings to understand something about past environmental history, because the tree actually records as set of information about what was going on in the environment from one season and one year to the next.”

Griffin’s job is to study dendroclimatology, in which he uses historical and yearly information about trees to answer various questions in regards to climate changes and patterns. An good example of his work is his study of trees in dry locations, specifying with trees that are on the edge of existence. From these trees, he is able to tell the amounts of variation in soil moisture among many years. One major reason why he targets California is because of the climate. California’s climate is dominated by a variability in moisture. A region that experiences much of this are the Oak Woodlands, where there is a low elevation of grasslands, this being a fundamental area for his and his team’s research in order to help them learn about past droughts.

Much thanks to Griffin and his outstanding work. For more information about Griffin and his studies, please visit https://sites.google.com/a/umn.edu/daniel-griffin/
Posted by Unknown at 4:19 PM No comments:

What Is The Real Price of Low Gas?

By Gracy Buckholtz
Jess Grady-Benson, a 2015 Brower Youth Award Winner, for her founding of Claremont College’s Fossil Fuel Divestment Campaign. The Campaign’s goals are to take moneyed investments out of the fossil fuel industry. To date the campaign has divested over a trillion dollars from Fossil Fuel companies. (Learn more at —claremontcollegesdivest.wordpress.com) Jess talks about the health issues to related to fracking, and how natural gas seems like the clean energy solution we are looking for, but it may lead to more problems than it solves.

Fracking is the process of drilling into the Earth with a high speed drill and water to release the natural gas trapped in the rocks. Proponents of fracking argue that it makes the U.S less dependent on oil from other countries and that it creates jobs back at home. Opposers bring up the healthy risks involved that the damage that it brings to the environment.

A lot of the issues around fracking are kept quiet because the companies that have made their money fund politicians. Organizations like Jess’s work to divest, to take money out of, the harmful fossil fuel industry. When companies take money out of the industry, they show that they don’t support the morals of the industry, this sends an important message that can reach many people.

Jess points out that while natural gas seems like a clean option to oil and coal, it might not be the solution we’re looking for. “‘Oh we can actually produce the energy we need, still using fossil fuels in the United States’ and claiming that it is has lower CO2 emissions when it’s burned then oil and coal, however it has a high composition of other warming gases, like methane”

While natural gas may seem like the answer we need to “clean”, local energy, the health and environmental damage outweighs the small benefits that it provides. Jess Grady-Benson has worked hard to bring awareness to the issues related to climate change. Her work as co-Founder at Claremont College’s Fossil Fuel Divestment Campaign is not only impressive but has made a real impact.

Posted by Unknown at 4:21 PM No comments: